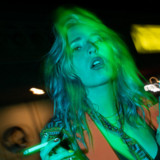 Los Angeles-based polymath PENNYWILD has signed to POPGANG Records for the release of her sophomore EP "NIGHT PEOPLE" - a love letter to underground drag, rave, ball, and club culture. Each song acts as a sonic vignette chronicling the vivacious hedonism of a night-out. The result is a stand-out cohesive project that threads together bouncy dance tracks with compelling storytelling and personality to spare. Following the release of her debut EP, MIDI In Motion - released on DOME OF DOOM, PENNYWILD is unleashing her fullest vision through the tutelage of her own creation: the PENNYPAD -a sound arena built from the exploratory and complex world of footwork, where dancing onto unique technology becomes the fuel for music creation.