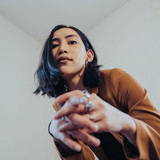 May Angeles is a California-bred, first generation Filipino-American who delights in all things ‘soul’: R&B soul, Neo-soul, Jazz, and Gospel to name a few. May is a Music & Worship Arts graduate from Vanguard University of Southern California and served as a main worship leader at Mariners Church Irvine for 3 years. She has toured China, Mexico, Europe and all over the United States, She has sung in everything from orphanages to large concert halls such as the Lincoln Center in New York City, and Carnegie Hall. She has been awarded GMA Immerse Female Artist/Writer of the year and Female Vocalist of the Year. May has served for the past four years as a full-time missionary, recording artist, and songwriter with People & Songs and The Emerging Sound. She has prominent features on multiple #1 iTunes charting records. May was one of the featured artists and writers on Throne Room Song that has traveled worldwide and is a rising Church favorite. She was also featured on a viral video of Revelation Song authored by Jennie Lee Riddle that has yielded over 36M views on Facebook alone. Her current and most exciting new endeavor is her recent marriage to her best friend and producer, Jake. Together, they have worked on their first joint project, May’s debut record, which is slated to release via People & Songs and drop mid 2021. Never Wanna Go Back fits the personality of joyful, May Angeles so well. Her trust in God’s goodness removes her fear of following Him into the future.