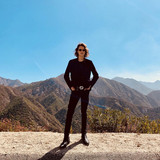 With the video for his first single “I Can Change” successfully reaching nearly two million views, Somerset, Kentucky native Will Muse released his sophomore single, “Spend” in April of 2019. “Spend” was released and promoted on Radio Disney. The talented 17 year old released an eye-catching video for the song, which he describes as “an upbeat, happy, and fun song that you’d want to play for the person you plan to spend the rest of your life with.” Will’s latest single “Shape of Your Faith” was released on November 8, 2019. Will stated, “musically it gives the listener a fun, groovy, and retro vibe. Lyrically the song describes how love can be expressed in different forms to shape your life. The creative process for writing, recording, and shooting the video for this song was truly memorable.” Following his new release, Will has several more singles ready for release. Muse frequently travels to Los Angeles and Nashville for music endeavors. Something very important to Will is his foundation. In 2017, Will combined his passion for music and his passion for helping others. He founded Music for Wishes, a Make-A-Wish foundation fundraiser that has raised well over $85,000 to help fund the wishes of local children with life threatening and chronic health conditions. Will has also been featured on numerous news networks including WTVQ, Midday Kentucky, WLEX Making a Difference, Nashville Today, and The Nashville Insider.