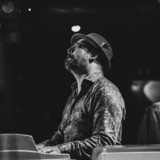 Since the early 1970s Fender Rhodes and Wurlitzer electric piano sounds had the most profound and sustainable impact on the music heritage of funk and soul. For several years now Berlin-born pianist, keyboarder and composer Matti Klein has played “Wurli” and “Rhodes”, as he affectionately calls them, as an integral part of his music. It all began with 10 years of recording and touring with the award-winning funk jazz quartet Mo’ Blow (ACT Music). Apart from that he played and arranged music for stars such as Herbert Grönemeyer, Sarah Connor and Jimmy Somerville and he has also worked as a soloist, sideman or musical director with many jazz greats such as Nils Landgren, David T. Walker, Ed Motta, Allan Harris and Torsten Goods.Over the years he performed more than 1000 national and international concerts, playing legendary jazz venues such as the Blue Note Tokyo, Ronnie Scott’s London, the Highline Ballroom NYC or the New Morning Paris, as well as major festivals such as Jazz in Marciac, Pori Jazz Festival, Leverkusener Jazztage, Elbjazz Festival and Jazz Baltica. The debut album „Soul Trio“, released in January 2020, received the highest accolades from both critics and audiences alike, followed by "Soul Trio Live On Tape". Released at the end of April 2021, the latest recording grants intriguing insights into the trio's evolution and sound philosophy, recorded directly to tape at the legendary Lovelite Studio in Berlin. A live concert atmosphere - unaltered and pure!