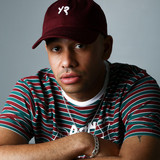 “South African rapper YoungstaCPT’s debut solo album 3T has been years in the making. But the emcee knew he had to build his name before he was ready to release it. For years, he was releasing mixtapes — he has released 30 to date. Add several EPs, a few collaborative albums, countless music videos and a few tours to an already rich resume, and you have one of the most prolific rappers south of the Equator.” – THE FADER After listening to YoungstaCPT's album 3T, the parallels between American cities like Compton and South Africa's Cape Town are quite apparent. During the late '80s and early '90s when West Coast rappers were reflecting on the crack era and police violence, they were 25 years removed from segregation and the perceived notion of freedom. Now 25 years after apartheid, Cape Town's youth are now going through a similar experience of reawakening and recognizing that the freedoms that their elders fought for have not yet come to fruition.

"I'm the voice of the people that you haven't been allowed to speak all this time. What do you think those people would say after all those years of silence? That is who I am. I am the first one to remove the gag and the blindfold, open the curtain and speak out." -Paper Magazine “The Cape Town rapper YoungstaCPT is one of the most prolific emcess in South Africa…” – Okay Africa