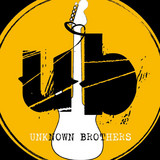 The Unknown Brothers are songwriting duo Andrew Harper (singer, lyricist) and Ciaran Ryan (guitars, music), from Swansea, UK. They would describe their music as melodic indie pop-rock. Their influences are eclectic and include The Kinks, The Beatles, The Manic Street Preachers, and The Shins. Good friends first, and self-confessed music lovers, the two have dabbled with making songs on and off for many years, but in 2019 knuckled down and released their debut double album, 'These Truths Remain Unspoken', which they recorded, mixed and mastered themselves on an iPad mini. During lockdown n they have been flat out writing new songs, which they are currently putting the finishing touches to, despite the fact they cannot meet up physically. Their latest song is All for Show. Their last song was Toxicity.