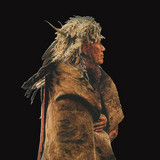 Indian Calling is a music band founded by author and producer Max Titi and was formed inside the Spotted Eagle Camp, a real tepee camp that shares customs and traditions of Native American peoples. Its founders are Gualtiero (Riding a Horse Bajo), Mauro (Red Wolf) and Max Titi. Gualtiero received the gift of the spiritual name and ceremonial rattle directly from Bruce Starlight who is the head of the inter-tribal council of the seven nations and descendant of chief Brokenknife, spiritual leader of T'Suu T'Ina people - also known as Sarcee. The music by Indian Calling is of electronic, house and ambient genres mixed with traditional instruments of Native Americans In 2007 they released their first CD titled "Indian Calling" produced by label Maxy Sound and many other albums in the following years. In 2016 they recorded “Spiritual Native Chants” featuring Uqualla, a medicine man and member of the Havasupi Tribe (people of the blue-green waters). Indian Calling's music has been featured in many films: Black Border Warriors (winner at the Black International Cinema Festival in Berlin) among the others. In 2019 the song “At War” was the soundtrack for the commercial of the popular Italian brand: Acqua San Benedetto (Ecogreen).

Indian Calling have been keeping up their live gigs, performing in the camp and in many other cultural events. Along with all their activities and their nomadic lifestyle, they've found inspiration and time to record many original songs.