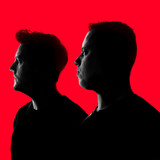 Madou are two Belgian producers. Making their debut in 2017 on Skrillex's NEST imprint with Nowhere Else the track was premiered by The Magician as the opening track on one of his acclaimed ‘Magic Tapes’ and would go on to be championed by DJs from Gilles Peterson (BBC 6 Music/Worldwide) and DJ Target (1xtra) to The Aston Shuffle (Triple J) and Anna Lunoe (Beats 1). Praised by everyone from Thump and Dancing Astronaut to dozens of blogs worldwide whilst earning comparisons to the likes of Four Tet, Moderat, Pional and Jamie xx the duo would go on to further showcase their philosophy of "no genres, no expectations, no strings attached” with the 4 track Changing EP and single About Tomorrow both released on their own Lekker label. With remixes for their fellow countrymen VRWRK and Felix Pallas working their way into the DJ sets of some of the most exciting DJs around, Madou caught the attention of East London label Needwant (sometime home to the likes of Ejeca, Maxxi Soundsystem, Kiwi and many more) with their first single for the label, 'Odo Island', released in Feb 2019.