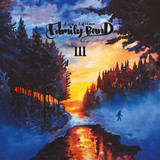 With the new and third album Lisa Lystan Family Band is finally back on the road, both in Sweden and Europe. The band, which at several occasions have been embraced for their experimental live shows, leaves nobody disappointed with spontaneity and an extraordinary experience. During five days of musical joy and experimenting the record "III" emerged. In Strawberry Studio, with renowned producer/technician (and bass player) Sven Lindvall, music was made with equal parts blues and the Lisa Lystam Family Band sound that's been shaped through out the years. Lisa's voice is both powerful and energetic but with an equally beautiful sensitive side, which gives the music a lot of dynamics. Backing this up is the ol' usual suspects Fredrik, Matte, Johan and Patrik - all standing strong alone, but together make one of Scandinavia's tightest and grooviest blues and rock band. The hundreds of concerts and festivals together (such as Sweden Rock Festival, Peace and Love Festival and Notodden Bluesfestival)they have impressed audiences both in and outside Swedens boarders.