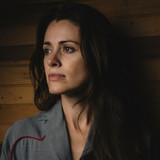 Caitlin Canty is an American singer/songwriter whose music carves a line through folk, blues, and country ballads. Her voice was called “casually devastating” by the San Francisco Chronicle and NPR Music describes her songs as having a “haunting urgency.” Motel Bouquet, Canty’s third record, features ten original songs that hold her darkly radiant voice firmly in the spotlight. Produced by GRAMMY-winning Noam Pikelny (Punch Brothers) and recorded live over three days in Nashville, the album boasts a band of some of finest musicians in roots music, including fiddler Stuart Duncan and vocalist Aoife O’Donovan. Rolling Stone hails Motel Bouquet as “dreamy and daring” with “poetic lyrics and haunting melodies.” Since the release of her critically-acclaimed Reckless Skyline in 2015, Canty has put thousands of miles on her songs, circling through the U.S. and Europe. She warmed up stages for Josh Ritter and Mary Chapin Carpenter and recorded with longtime collaborators Darlingside and Down Like Silver, her duo with Peter Bradley Adams. Born and raised in Vermont, Canty now lives in Nashville, TN.