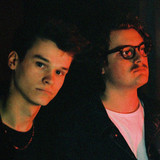 Fresh-faced Melbourne trio Osaka sound destined for big things. Their 2015 debut single 'Vessel ' saw them quickly collecting praise from the likes of Indietronica, Rolling Stone, and FasterLouder. While their 2016 follow-up single 'Weights' and subsequent EP 'Manoeuvres' has seen this pattern continue exponentially, bringing the band an unlikely loyal following in Brazil, Germany and UK. Quoting influences of The Strokes, Phoenix and The Killers, Osaka bring their own brand of indie rock only updated for the electronic era. Blending driving guitars with programmed synths and intimate yet oblique lyrics from frontman Edvard Hakansson, Osaka’s sound allows the listener to feel both that spark and driving energy of something new and something you’ve been missing.