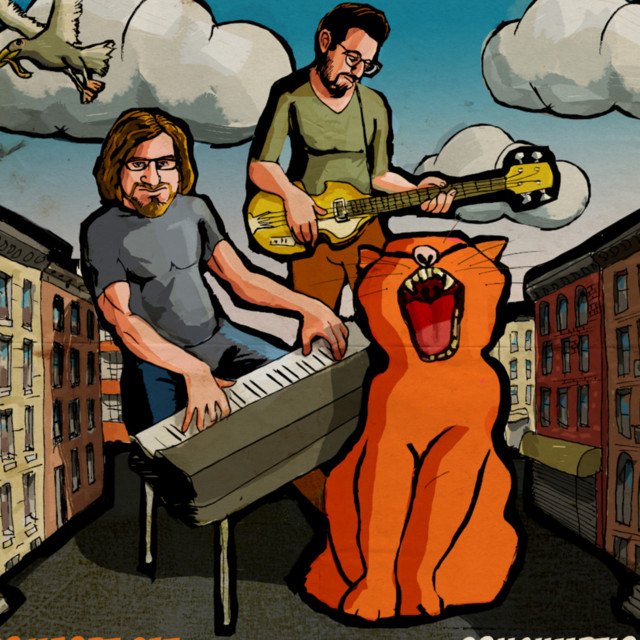 Comfort Cat & Friends is a New York City-based rock trio. The lineup is comprised of frontperson Comfort Cat on the “guitarlele” (i.e. a six-stringed tenor ukulele), Jason Laney on keys/percussion, and Dan Veksler on bass/guitar. As one fan put it, they sound like “punk-by-way-of-the-divine,” a pithy way of describing the ongoing relationship between raw fury and spiritual longing present in every song. The band also reminds listeners of musical theater, due to Comfort Cat’s dynamic melodies and penetrating lyrics. Their influences include, but are not limited to, The Beatles, Tiny Tim, Brian Wilson, Bjork, Sleater-Kinney, early jazz ballads, and musical theater, especially the songs of Alan Menken (most known for the “Disney Renaissance”). There’s also a classical sensibility, which can be heard throughout every song as the band swiftly moves between quiet and loud, encompasses a wide melodic range, and frequently ends with a hearty “baroque stop.” While various pop genres are obviously present, Comfort Cat’s early training as a classical violinist and ensemble/orchestral player has left an indelible mark on her songwriting and musical approach. Originally from the West Coast, Comfort Cat has lived in NYC for nearly 15 years, with two interludes studying music in the United Kingdom. She/it/they is a violin teacher as well as a songwriter, and has a grey cat named Jack.