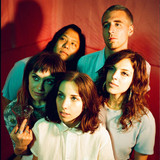 Formed in 2010 by Sharon Silva, Kinsey Lee, and Mackenzie Howe, the Wild Reeds are a self proclaimed “black metal sparkle folk” band from Los Angeles-based. Following a pair of self-produced folk-oriented releases, the three song-writers began playing with bassist Nick Phakpiseth and drummer Nick Jones, expanding their instrumentation on their 2014 release Blind And Brave. In 2016 they signed a deal with Nashville indie label Dualtone Records, going on to work with producer Peter Katis (The National, Interpol, The Swell Season) on their 2017 album The World We Built. The band has spent much of the last 6 years touring (with the likes of: Lord Huron, Langhorne Slim, Wild Child, Shakey Graves,The Lone Bellow), and consider the road home at this point in their career. Though harmonies always find a way into their music, at the heart of it they aim to continually evolve as song writers and you can hear the stylistic differences with each new record.