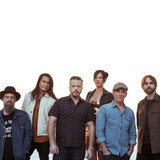 After spending six years with Southern rock outfit Drive-By Truckers, singer/guitarist Jason Isbell left the group in 2007 to pursue a solo career. Isbell had already honed his songwriting skills during his tenure with the Truckers, and he funneled those talents into Sirens of the Ditch, a bluesy, punk-infused lesson in guitar tones and Southern swagger that marked his solo debut in summer 2007. While Isbell took a more introspective approach on his next two albums, 2009's Jason Isbell and the 400 Unit and 2011's Here We Rest, he enjoyed a critical and commercial breakthrough with 2013's Southeastern, a lean but compelling set written and recorded in the wake of Isbell coming to terms with his alcoholism. Newly sober and reenergized, Isbell began attracting a significantly larger audience for his concerts, and his subsequent studio albums Something More Than Free (2015) and The Nashville Sound (2017) reaffirmed his status as one of the most celebrated songwriters on the roots music scene. After parting ways with the Drive-By Truckers in 2007, Isbell wasted no time launching a solo career, and a collection of songs he'd been tinkering with for years formed the basis of Sirens of the Ditch, which was co-produced by DBT's frontman Patterson Hood and featured former bandmates Brad Morgan on drums and Shonna Tucker on bass. (The latter was also Isbell's former wife.) Backed by a new band dubbed the 400 Unit, Isbell took his songs on the road and soon began penning another album, which he recorded with the 400 Unit in 2008. Released the following year, Jason Isbell and the 400 Unit was another step away from his work with the Drive-By Truckers, relying as much on sad, melancholic country ballads as the familiar Muscle Shoals sound. After performing more than 200 shows annually for several years running, Isbell took a breather in 2010 and returned home to northern Alabama. The area had been hit hard by the recent economic downturn, prompting him to write a new batch of songs about the war vets, barflies, and out-of-luck characters who populated the area. The result was Here We Rest, which was released in spring 2011 to critical acclaim. Isbell followed it a year later in 2012 with a live set, Live from Alabama, recorded at the WorkPlay Theater in Birmingham and at the Crossroads in Huntsville. Embracing his newfound sobriety, Isbell next produced an album of haunting atonement and redemption, the sparse and impressive Southeastern, which appeared in 2013. Southeastern was a smash with critics and a commercial success that introduced Isbell to a new and larger audience. In 2014, Isbell issued Live at Austin City Limits, a video release documenting a set he played for the long-running PBS music series. Later the same year, he returned to the studio to record the follow-up to Southeastern. The resulting Something More Than Free appeared in July 2015 and took home the Grammy Award for Best Americana Album the following year. In March 2017, Isbell released "Hope the High Road," the first single from The Nashville Sound, which arrived in June. Credited to Jason Isbell and the 400 Unit, the album was fittingly more band-oriented than Isbell's previous two efforts, boasting a bigger and more musically diverse sound. More touring followed, and Isbell and the 400 Unit played a sold-out six-night stand that year at Nashville's Ryman Auditorium, the original home of the Grand Ole Opry. Several of the shows were recorded, and a 13-song concert souvenir, Live from the Ryman, was released in October 2018. May 2020 saw Isbell bring out his sixth full-length studio effort, Reunions, a more production-savvy set that mixed introspective personal numbers with songs addressing larger political and social concerns. ~ James Christopher Monger & Andrew Leahey, Rovi