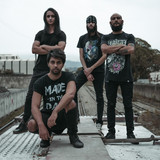 April 21st is a Brazilian metalcore band with a focus on melody, speed, and gargantuan heaviness. Based in Belo Horizonte, MG - Brazil, the band was created by guitarist, Herbert, in late 2016. Later in 2017, Nick Lucas (vocals) joined the band and with the support of other local musicians, the band recorded their first EP. In November 2017, the band released its first single called “In Your Destiny,” along with a music video on YouTube, and August Nery (drums) joined the project. In January 2018, the second single called “In Whose Name?” was released with an accompanying music video. The first EP named Remains was released soon after in several digital platforms around the world. In August of 2018, Nick Lucas left the band. In May of 2019, two new band members were added to the mix: Lucas Akira (vocals) and Helbert Collyn (bass guitar). Working now as a quartet, they recorded a new single called “Resilience.” The song was produced at Sonastério Studio in Nova Lima, MG – Brazil, while the mastering was completed at Fascination Street Studios in Sweden. The new single also featured special guest Drey Henrique on vocals. In July 2020, the band released the single, “Coldest July,” featuring special guest, Leo Turbo on vocals. In November 2020, April 21st released the single, “We Are the Difference,” the third record created by the current band line-up. In 2021, April 21st signed a record deal with Eclipse Records and releases the second EP named "Courage Is Born from Fear".