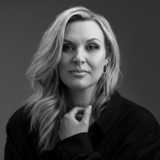 Sanna Nielsen has been a presence on the Swedish charts since she was just 11 years old, when she scored her first hit with "Till En Fågel." Blessed with a voice of impressive power and clarity, she is probably best known for her frequent entries into the Swedish Melodifestivalen, the most popular television show in Sweden, in which veteran performers compete alongside unknowns to represent Sweden in the Eurovision Song Contest. Although she has never won the competition, Nielsen reached the grand finals on four occasions. She came third in 2001 with "Igår, Idag," fifth in 2003 with "Hela Världen För Mig," eighth in 2005 with "Du Och Jag Mott Världen," and sixth in 2007 with "Vågar Du, Vågar Jag." She is also a highly popular touring attraction, and in 2007 co-headlined an extensive nationwide tour with Shirley Clamp and Sonja Aldén. She also released a greatest-hits collection, 11-22, chronicling her 11-year career to date. In addition to her hit singles, the collection featured Swedish-language renditions of modern standards "Time to Say Goodbye" and "You Raise Me Up." ~ John Lucas