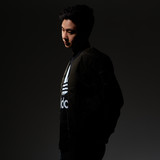 Felix, also known as La Felix, is a Funk/Nu Disco artist currently based in Auckland, New Zealand. Unlike most millenials, music was not readily available to him on the internet, instead Felix was a “crate digger”. He discovered his music by sifting through his mother’s huge vinyl collection. Vinyls ranging from the Jazz and Blues eras, to Classic Rock, Funk, and Hip Hop captivated his creativity. Felix attributes his genre melding melody writing to the diversity he found in those crates. La Felix now finds his inspiration from artists such as Oliver Nelson, Louis The Child, and Cosmo's Midnight. His first major single, “Delicious”, has just surpassed 3M streams across all platforms and even landed a spot on Netflix’s “Insatiable” S01E01. Continuing off the success of “Delicious”, La Felix has since amassed over 20M streams across all DSP platforms and has been featured on Spotify editorial playlists including: golden hour, Feel Good Dinner, Sunshowers, Pop Edge, Indie Dancefloor , Friday Cratediggers,The Office Stereo, Office Studio, NMF, Fresh Finds: Basement, Poolside Grooves, as well as Apple Music’s, The Lounge, and Breaking: Electronic. With official remixes for a variety of artists including RAC, 12AM, DCUP, Dylan Rockoff, The Shadowboxers, My Brothers And I, The Funk Hunters, Limon Limon, and 88/89, La Felix’s ability to interpret any genre into his own sound sets him apart as a remixer.