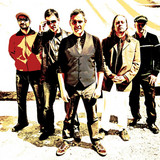 Kokolo's punk-infused blend of Afro-beat, salsa, jazz, and funk has taken the behemoth New York City-based collective all over the world. Formed in 2001 by singer/songwriter Ray Lugo, the band grew into an eight-piece and became a fixture at legendary Big Apple avant-garde haven the Knitting Factory. The band's debut album, Fuss and Fight, was released independently in 2002, followed by More Consideration in 2004, Love International in 2007, Heavy Hustling in 2009 and 100 Fevers in 2017.