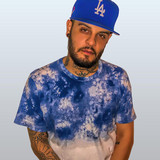 Vincent James Hernandez, better known by his stage name Picasso V, is an American musician, rapper, singer, songwriter & record producer. As no stranger to the streets & the legal system his story mirrors the message of hip-hops inner city roots. He was known as “Vendetta” rapping with a vengeance, and upon completion of his prison sentence he has said “I am a changed man, I want to paint a picture with my music, therefore the new name, Picasso V. Sharing his testimony through his intricate rhymes along with his creative story telling he hopes to help others going through hard times. Writing has been a passion from a young age. Influenced by lyrical leaders such as Biggie, Tupac, Eminem & Nas - He began to rap about his own experiences, trials and tribulations of just trying to make it. “My objective is to connect with my fans no matter what race, religion or culture. All that should ever matter, is that you stay true to yourself. Never give up and last but not least NEVER let ANYONE tell you that you CAN’T!