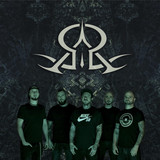 • New album Metanoia is OUT NOW! • With a low slung and highly syncopated approach suggesting more than a passing awareness of Djent and other highly syncopated progressive metal. Not only keep delivering groovy polyrhythmic metal music, but they also continue their persevering trek through the limitless potential of the human mind. In other words, it’s another auspicious case of elaborate Heavy Metal permeated by an enthralling concept. Omega Diatribe was formed in 2008 by Gergo Hájer (guitar) and Ákos Szathmáry (bass). They bring super heavy grooves combined with crazy polirhytmic elements. After years of hard work, they released their full-length debut album titled IAPETUS which was nominated the ‘Best album of the year’ in Hungary, and landed on the second place. The band also worked together with the legendary drummer Kevin Talley who is featured on their second release ABSTRACT RITUAL which was released on the 26th of February in 2015 under the wings of ILS Group at Universal Music Group. By 2016 the band was mostly playing abroad and bigger festivals such as Euroblast. Omega Diatribe released their 3rd studio record called TRINITY in 2018, which has been co-produced, mixed and mastered by the Danish producer Tue Madsen at Antfarm Studios. Trinity has been released under the wings of Metal Scrap Records. After 2 years of massive touring Omega Diatribe won the 'Best live band of the year' and also the 'Best studio production of 2018' on Hungarian Metal Awards.