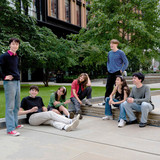 Black Country, New Road - the name originally found on a random Wikipedia generator - have made an impressive impact on fans and critics alike. After just two early singles, they were declared “the best band in the world” by The Quietus, with glowing reviews from The New York Times to NPR, to The Guardian.

The band arrived via the Brixton, Windmill scene in the UK in 2019, seemingly fully formed and bristling with a wiry tension that merged post-rock soundscapes with jazz-inflected post-punk.