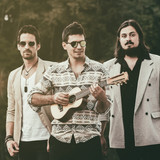 Fortuan is a passion project of three long-time friends from Bratislava, Slovakia, who hail from three vastly different backgrounds – one of them is a programmer, one an accountant and one a luxury pool technician. What unites them though is their shared love of rock music. Their shared musical journey started in a cover band Wooders, playing certified rock classics at weddings and other events. It didn’t take long until they started writing and recording their own music. The band marked this shift by changing their name to Fortuan – a phonetic transcription of +421, Slovakia’s calling code – expressing their love of their homeland while also signifying international ambitions. The band’s music builds on the classical rock sounds of the second half of the 20th century and enriches them with modern influences. This combination creates an indie rock sound infused with the best of what this century has to offer. This combination ensures that listeners of all ages find something in Fortuan’s music that speaks to them. Their wide appeal has already landed them numerous live shows at Slovak music festivals and even got them a couple of wins in band competition. Their biggest success so far has been a victory in 2019 Slovak music competition “Rocková maturita” (Rock graduation). The band released several singles throughout 2019, namely Time, Force and Melodies, which all later appeared on the debut album, Flavours, which was crowdfunded by their fans.