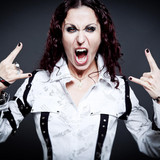 November-7 is more than 15 years of records and touring. They have played all over Europe: UK, Germany, Netherlands, Belgium, Austria, Poland, Czech Republic and of course their homeland, Switzerland.Their latest opus is Overload 1.0 (2018). Their previous album Awaraxid 7mg was released in 2014 and received rave reviews all over the world. This new record is a mini album with 5 tracks and in a style halfway between industrial metal and electro-rock. Like for its previous works, the band did not resist the temptation to come up with a new story. This time they tell us the story of their new producer, Dyno, a green dinosaur that was miraculously discovered alive in a melting glacier. The only survivor of his species that became extinct a long time ago, he has set himself one objective: to do whatever he can to avoid the extinction of a seriously endangered species: MUSICIANS. He has chosen November-7 as his first challenge: indeed he finds them quite mediocre and wants to help them reach success. He puts all his effort in this endeavor and intensely collaborates with the band, guiding them throughout the whole creation process of the new record. Like for the previous records and in agreement with Dyno, Overload 1.0 has been mixed by the magician Stefan Glaumann, mixing engineer of renowned bands such as Rammstein.