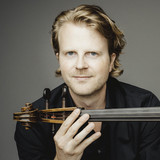 Steckel’s solo career was launched in 2010 after winning the prestigious ARD Musikwettbewerb, one of the largest international classical music competitions in the world. Since then, he has soloed with the Gewandhausorchester Leipzig, the Royal Philharmonic Orchestra, the Orchestre de Paris, the Rotterdam Philharmonic Orchestra and the St. Petersburg Philharmonic, among numerous other ensembles, and worked with such monumental conductors as Christoph Eschenbach, Sir Roger Norrington, and Valery Gergiev. His chamber music partners include Janine Jansen, Christian Tetzlaff, Karen Gomyo, Antje Weithaas, Renaud Capuçon, Veronika Eberle, Vilde Frang, Antoine Tamestit, Lars Vogt, Elisabeth Leonskaja, Paul Rivinius, Denis Kozhukhin, the Modigliani, Armida and Ébène quartets. With the birth of his first child at the end of 2018, Steckel’s solo life simultaneously has become more about putting down roots. “As an interpreter, I’ve started trusting my inner life more and letting the audience in. It’s a kind of vulnerability that makes you stronger.” Besides performing on major international stages he is also a teacher and holds a position at the Hochschule für Musik Munich.