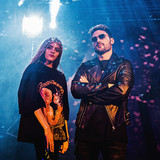 Shanguy is a collective of musicians created by DJ NRD1 in summer 2017. It Followed a series of collaborations until he stumbled onto French singer/songwriter and producer Eon Melka and the Italian singer/song-writer Frank-O. The three teamed up and crafted a UFO-song mixing French and English on the theme of "Louze" (typical french loser spirit!). "La Louze" reached rapidly success, including a Platinum Award and an entry in Shazam World Top 50, propelled the collective into an exciting adventure across all Europe. Subsequently, the three musicians joined their forces again and released another successful song; “King of The Jungle” (Gold Awards in Poland) breaking thus, the boundaries between dance and pop music. In Summer 2018 Shanguy performed at the Warsaw Stadium and in the Zakopane NYE Concert. In March 2019 the Italian/Moroccan singer and songwriter Shady joined the collective with the song Toukassé. Following its release, they started a full dates tour reaching important stages and prizes as Kremlin Palace , Luzhniki Arena in Moscow and the Nur Sultan Music Awards 2019. In december 2019 they released their single « Désolée (Paris/Paname) » which received a double platinum award in Poland, has been featured in Mint playlist of Spotify that has more than 5 MLN Followers, entered top 200 Spotify World, and arrived in the US classifying 6th in the dance billboard.