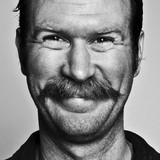 Charles Spearin is a multi-instrumentalist who has been an active and influential member of Canada's independent music community since the mid 1990's. He is primarily known as a founding member of the instrumental post-rock ensemble Do Make Say Think and an original member of the indie-rock collective Broken Social Scene, and its spiritual predecessor K.C. Accidental with Kevin Drew. Spearin's solo work includes the JUNO Award winning avant jazz album titled The Happiness Project, and Thank God The Plague Is Over, an improvised classical album recorded in a tiny chapel in northern Italy.