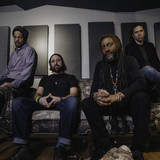 Critically-acclaimed hard roots rock reggae outfit Natty Nation is a collective of spiritual warriors. For over twenty years, the Madison, Wisconsin-based group has purely and fearlessly followed its inner artistic continuum. Along the way, Natty Nation has burst through genres while retaining a distinct roots reggae core. Through it all—whether it's onstage conducting its shamanistic live show, or in the studio pushing the scope of its musicality while honing its sharp songcraft—Natty Nation has remained dedicated to one mission: spreading light. On March 11th, 2016 Natty Nation issued its brightest beacon yet, Divine Spark (iNatty Records). “Our ultimate goal is to uplift as many people as possible through sound & vibration,” says frontman Jah Boogie - bass, lead vocals (also percussion/drums in the studio). “To do that we hope to take our music to as many places on this earth & positively influence as many souls as we possibly can.” Natty Nation’s unique pedigree of a Midwest home base & artistic openness has helped the posse foster a signature sound. The group describes themselves as hard roots rock reggae because in addition to their honest & authentic roots reggae foundation, often drawing comparisons to Aswad, Steel Pulse, & Talkin' Blues era Bob Marley & The Wailers, their embrace of soul, rock, & funk is undeniable. Natty Nation is also influenced by such diverse geniuses as Michael Jackson, Jimi Hendrix, Living Colour, Earth, Wind & Fire, Fishbone, & Bad Brains.