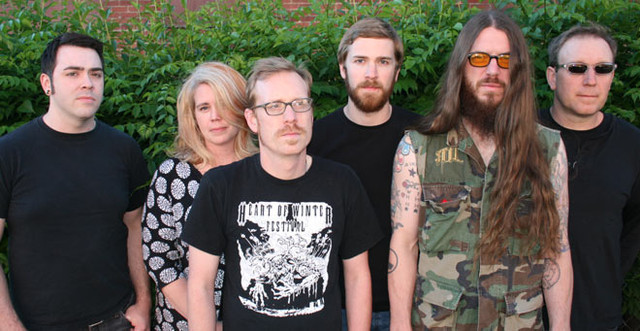 U.S. Christmas (aka USX) is a psychedelic-space-rock-post-metal ensemble originating in the Appalachian Mountains (Marion, North Carolina, to be precise) and consisting of Nate Hall (guitar, vocals), Matt Johnson (theremin, synthesizer, guitar), Josh Holt (bass), B.J. Graves (drums), Justin Whitlow (drums, synthesizer), and Meghan Mulhearn (violin). Their journey began inauspiciously in the summer of 2002, with the band performing at whatever venues would have them (biker bars, art spaces, you name it), while recording a pair of albums in CD-R form, before hooking up with a Russian label for their third release, 2006's Salt the Wound. This duly brought the group's unconventional music to the attention of risk-taking independent label Neurot Recordings, and U.S. Christmas has since toured with bands like Saviours, Baroness, and Neurosis while releasing additional albums, 2007's Eat the Low Dogs and 2010's Run Thick in the Night. ~ Eduardo Rivadavia, Rovi