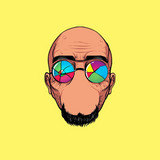 Smokey the Ghost is a socio-conscious Indian rapper. Hailing from the city of Bangalore, he has been a pioneer in the Indian Hip Hop Scene for the past 15 Years. Being the founding member of the popular group, Machas With Attitude; he rendered his voice to many popular Bollywood films like Chennai Express & Detective Byomkesh Bakshy. In 2017, he collaborated with electronic duo, Aerate Sound, which led him to be the first rapper from India to appear on the Bangalore edition of The Boiler Room. Smokey the Ghost & Aerate Sound are set to perform at The Magnetic Fields Festival in late 2017, which will make him the First rapper to feature on the festival as well. Smokey is set to release his debut album in August 2019.