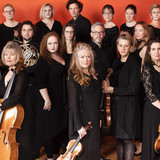 Just over 25 years ago, Britten Sinfonia was established as a bold reimagining of the conventional image of an orchestra. It is a flexible ensemble with a unique vision: to collapse the boundaries between old and new music, to collaborate with artists from across the arts, and to create involving, intelligent music events that are experienced with an unusual intensity. Its projects are always underpinned by a commitment to uncompromising quality, whether the orchestra is performing in New York’s Lincoln Center or in Lincolnshire’s Crowland Abbey. Today Britten Sinfonia is of the world’s leading ensembles and its philosophy of adventure and reinvention has inspired a new movement of chamber groups. It is an Associate Ensemble at London’s Barbican, Resident Orchestra at Saffron Hall in Essex with residencies in Norwich and Cambridge. It performs a series at London’s Wigmore Hall and appears at major UK festivals including Aldeburgh, Brighton, and Norfolk and Norwich Festivals and the BBC Proms. The orchestra has performed a live broadcast to more than a million people worldwide from the Sistine Chapel, is a BBC Radio 3 Broadcast Partner and has award-winning recordings on the Hyperion and Harmonia Mundi labels. Outside the concert hall, Britten Sinfonia works on projects with children, teenagers, young carers, people suffering from dementia and life-time prisoners. The orchestra’s OPUS competition offers unpublished composers the chance to receive a professional commission.