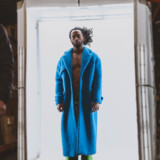 As a true modern nomad, born in France to an Italian mother and a father from West Africa, as a French and Canadian citizen,

Jaymie Silk's life, is tinged with this question of identity that concerns us all (the main subject of his Diasporave trilogy released in 2020 on Pelican Fly). Jaymie is by default, as he defines himself, “a cultural bastard”. Like all of us, this digital nomad is both face-to-face and in the machine. Music Producer and Resident DJ for the Montreal Ballroom scene, Jaymie Silk quickly made a name as a producer being immensely prolific through a number of remixes, EPs and albums. He quickly acquired a strong legitimacy as a sound creator and performer. In addition to his music used in award-winning TV shows and documentaries, as well as by brands such as Nike during the 2018 soccer world cup, it's through his remixes, bootlegs and original productions that Jaymie has attracted attention to his music (Billboard, Dj Mag, Afropunk, Vice,Xlr8r ...) . Whether on French (Boukan Records, Resources, Bel Air) , Japanese (Trekkie Trax) , Chinese (Babel Records) or North American (Fools Gold, Frite Nite, Knightwerk) labels, as well as gigs in Canada ( Picknic Electronik , Igloofest, Moonshine) , U.K