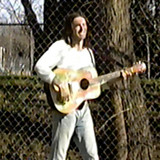 Paul Jacobs’ cartoon world is constantly expanding. Since uprooting himself from the border city of Windsor, Ontario to the perpetually buzzing Montreal music scene, his hand-drawn animations and hallucinatory illustrations have graced the covers of multiple albums per year. As the drummer of post-punk quintet Pottery, Jacobs is the engine behind yelpy extended jams that sound equally at home on a nightclub dancefloor or at a psych festival. Yet it’s solo albums like Pink Dogs on the Green Grass where Jacobs’ soft-focus, lysergic visions truly bloom. Jacobs first emerged in the early 2010s as a one-man band, stomping out echo-drenched garage-rock reminiscent of Thee Oh Sees. As Jacobs’ discography grew, so did his songwriting ambitions, with 2016’s Pictures, Movies & Apartments providing an early glimpse at a tuneful side under smears of no-fi shoegaze. Now that Jacobs has reinvented himself as a psych-pop troubadour, the simplest comparisons are probably Kurt Vile’s pretty daze and White Fence’s trippy haze, but it’s Cass McCombs he has namechecked as an enduring inspiration. Pink Dogs on the Green Grass bursts at the seams with twinkly keys, acoustic jangle, and clopping bongos, accentuating its sly hooks with sounds from a Summer of Love revival. Winnowing down 40 half-finished demos to 13 overstuffed songs, Jacobs handed the album off to mastering engineer Oliver Ackermann from A Place To Bury Strangers -by Jesse Locke for Pitchfork