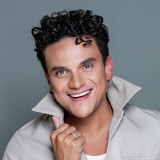 One of the leading lights of Colombian music in the 21st century, singer and instrumentalist Silvestre Dangond has become a star with his updated take on vallenato, a traditional musical style from the Caribbean regions of Colombia. Dangond was born in Urumita, La Guajira, Colombia on May 12, 1980. His father was William José Dangond Baquero, who performed as a vocalist in his spare time, using the stage name El Palomo. Growing up in a musical household, Silvestre became interested in performing at a young age, maturing into an accomplished singer and timbale player. After completing high school, he chose to make music his career, and teamed with accordion player Ramón López. The duo began playing parties and club gigs, making a reputation as a solid live act. In 2002, Dangond and López landed a record deal with Sony Music and soon released their debut album, Tanto Para Ti. In 2003, Dangond was introduced to accordion player Juancho de la Espriella, and the two soon struck up a professional relationship; de la Espriella replaced López in the act, and Dangond and de la Espriella teamed up for an album, 2003's Lo Mejor Para los Dos. The duo soon delivered two more albums, Mas Unidos Que Nunca (2004) and Ponte a la Moda (2005), as they became major stars in Colombia. By the time Dangond and de la Espriella had released their seventh album together, 2011's No Me Compares con Nadie, they were the nation's top vallenato act, and received diamond certification for Colombian sales, while the album topped the Colombian album charts. They were also selling out venues in Colombia, Venezuela, and Ecuador, and attracting a growing following in the United States. But despite their success, the duo broke up, and Dangond took solo credit for his next album, 2013's La 9a Batalla, which featured accordion player Rolando Ochoa. If Dangond was worried about how his audience would react to his split with de la Espriella, he didn't fret for long; La 9a Batalla once again topped the Colombian album charts, and 2014's Sigo Invicto not only earned Dangond another diamond sales award, but topped out at number nine on the American Tropical Albums chart. While Dangond had developed a reputation as a bad boy in Colombian music, due to allegations of drug use, assaulting a child, shooting guns in public, and friendship with drug traffickers, it did little to undermine his popularity in Latin America, where he enjoyed a passionate fan base. Dangond also had a growing audience in the United States, where he was nominated for five Latin Grammys and drew 5,000 fans to his first gig in Miami. In 2017, Dangond returned with the album Gente Valiente; like Sigo Invicto, the sessions featured the accordion work of Jorge Lucas Dangond, Silvestre's cousin. ~ Mark Deming, Rovi