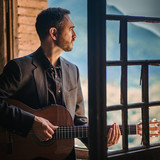 Ramiro Pinheiro is a subtle and creative acoustic guitarist from Brazil who is also a talented songwriter. Pinheiro moved to Barcelona (Spain) years ago and he has been an important part of the local music scene ever since, working with a wide variety of jazz and Brazilian musicians, such as Horacio Fumero, Rafael Barata, Rita Payés, Jurandir Santana, Amoy Ribas, Rodrigo Bezerra, among others. While he has appeared on several recordings, Sentido (Fresh Sound Records, 2021) is his debut CD as a leader, produced by Rodrigo Balduino. "Ramiro Pinheiro’s Sentido is highly recommended to any listener having a love for Brazilian jazz. The rich melodies, variety, and top-notch musicianship along with the consistent creativity make this a memorable release." Scott Yanow, jazz journalist / historian [AllMusic - L.A. Jazz Scene]