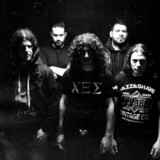 After Dusk is a heavy metal band from Athens, Greece founded in 1998. They have released 4 full length albums and played concerts in venues and festivals. The band describes their music by a quote, written by the press, for one of their records: “…pure heavy metal can exist…” Apart from live appearances and composing songs, little has happened until 2004, when they started working on their demo “Senses of Dusk”, which was finished in early 2005. Their first album, “The witch’s pact”, became reality in 2006. It contained 10 metal dynamites and continues to give people a good head banging until this day. The album was self-released on a limited number of copies. In 2008, they finished their second album entitled “Hybris”, which sounds like concrete cracking from an earthquake, driving the band’s sound into a heavier and more solid direction. “Hybris” was released worldwide in November 2009. In 2012 their third album was complete. Entitled “The devil got his soul”, it is described by fans as a heavy metal statement. Compiled of 10 songs, it unfolds track after track into a riff manifest! In September 2013 After Dusk released a single called “Gamma ray burst”. It tells the story of a nice day on Earth, being abruptly ruined by a cataclysmic event that happened light years away. Their latest album is entitled “The Character of Physical Law”. Produced by After Dusk, engineered, mixed, mastered by George Emmanuel and released worldwide on May 23rd, 2017.