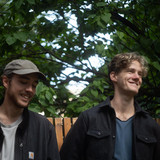 Building towards the next album, Temporary has released three singles this far in 2020: “Youth”, "In a Moment" and “Standing Still”, with the latter being listed on NRK P3 - the biggest Norwegian pop radio channel - for two months. Out October 30th, the duo is now ready to launch their fourth. The fourth single, titled "Familiar Part", is a dark and melancholic tune for those cold autumn days. Recorded in one take in a small home-studio in Oslo, with one guitar, a piano, and three harmonizing vocals,