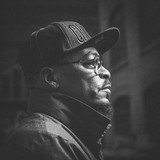 Roy Davis Jr., born in L.A. and raised in Chicago, is in no uncertain terms a legendary DJ, Producer and Remixer, and one of the key pioneers of Chicago House music. His 30-year career has contributed to defining Electronic music of today.    Davis was introduced to the world of dance music by the likes of DJ Pierre, Farley Jackmaster Funk, Marshall Jefferson and Lil' Louis in the late 1980s. Long before this however, he was introduced to the decks when he was 13, mixing breaks, Italo Disco and then years later, House, Techno and Acid.    In 1993, while still an athlete in college, Roy Davis Jr. decided the leave the familiarities of Chicago behind to become an A&R and record producer alongside long time neighbourhood friend, DJ Pierre for Strictly Rhythm in New York. While still based in Chicago, Davis Jr. went out to New York on a weekly basis, and subsequently went on to start his Strictly Rhythm sub-label, Red Cat Records.    A record which has risen to prominence over the past three decades, and remains one of the records hailed by many as helping kick-start the UK garage scene, ‘Gabriel’, was released in 1996, written and produced by Roy Davis Jr. alongside singer-songwriter Peven Everett. It would be released by Large Music and then XL Recordings. The record reached the top UK Charts and is still celebrated around the world as one of the most recognisable house tracks and basslines of all time.