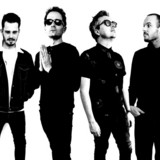 FROM THE STREETS OF SYDNEY TO SOME OF THE BIGGEST STAGES IN EUROPE... Growing from humble beginnings busking in Sydney, All Mankind have built up a loyal fan base around the globe, selling out shows and playing major festivals in Europe, while also hitting the US Spotify Viral Top 30. The four piece have received radio support from major radio stations across the world including including TRIPLE J, KIIS and 2DAY in their home country, as well as BBC RADIO 2 (UK) KROQ &amp; KCRW (USA) and many more. In addition, their tunes have been featured in mutli-million selling FIFA by EA Sports, and in over 25 high-rating TV shows and feature films in the US, Australia and Europe. WHAT PEOPLE ARE SAYING… “A really big, crisp sound … anthemic indie stuff” — Dave Ruby Howe, Triple J Australia. “A smash hit … this is going to be big”— Nick Littlemore, Empire of the Sun “Australia’s next biggest export…” — Record of the Day, UK “All Mankind delivers epic and heartfelt songs that evoke a timeless soundscape” — Nic Harcourt, MTV USA