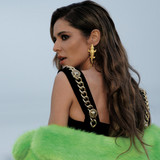 Cheryl, born Cheryl Ann Tweedy and formerly known as Cheryl Cole, was a dancer and model prior to becoming a member of the record-breaking European pop group Girls Aloud. As a youngster, the Newcastle, England native won several modeling competitions and appeared in commercials, but she made her biggest leap in 2002, when she auditioned for Popstars: The Rivals and was selected to join Girls Aloud, a group that went on to release 19 Top Ten U.K. singles within a matter of a few years. In 2009, Girls Aloud announced a yearlong hiatus, and Cheryl, who had become one of her country’s highest-profile celebrities (thanks in part to her role as a judge on another British singing competition, The X Factor, whose weekly audience swelled to 14 million viewers after she joined the cast), took advantage of the down time to record her first solo album. The surprisingly conservative 3 Words appeared in October 2009, featuring collaborations with will.i.am, Soulshock & Karlin, and Syience. Led by the Wayne Wilkins-produced "Fight for This Love," a number one hit and the fastest-selling British single of 2009, the album went platinum in two weeks. Cheryl's second album, Messy Little Raindrops, followed in November 2010 and fared similarly well, going platinum on the strength of hit singles like "Promise This." Once again, several tracks were produced by Wilkins, while will.i.am, J.R. Rotem, and Free School were involved in smaller capacities. Cheryl's career in the U.S. turned into a roller coaster ride, when she was first picked by Simon Cowell to be a judge on the American version of The X Factor, then left the show under controversial circumstances after only three weeks. She then declined to return to the original U.K. version of the show and decided to focus on her recording career. Her third album, A Million Lights, featured the Calvin Harris-produced single "Call My Name" and was released in June 2012 in the U.K. In late 2012, Cheryl confirmed that she would rejoin Girls Aloud for a reunion tour, which also resulted in the release of the charity single "Something New," before the group members confirmed in 2013 that they had split permanently. After taking a break for much of 2013, she returned to the limelight in 2014 with the announcement she had married Frenchman Jean-Bernard Fernandez-Versini, four years after her split with English soccer star Ashley Cole. That year she regained her place on the judging panel of The X Factor and announced the release of her fourth studio album, Only Human. Its first two singles, "Crazy Stupid Love" and "I Don't Care," topped the U.K. pop chart. ~ Andy Kellman & Tim Sendra, Rovi