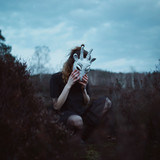 As soon as I finished High School, I travelled through New Zealand and Europe to leave a rather painful Episode of my life behind and to play Music in barely lighted rooms and under big trees. I found warm Bonfires, Bars filled with Artists and lonely Mountains where I played and wrote and sang Songs.2016 I went to Berlin to study Musicproduction which I did for 4 Years. I collaborated with diverse Producers and tried out different things, played as many little Gigs and dreamy Festivals as I could and released some Songs. 2020 I had some Radio-Plays and little TV-Moments, Covid made me collaborate with Techno-People and we landed in the German Clubcharts with Brascons "Treesong" and in the Beatport Charts and some big Playlists with Yannek Maunz's "Goldfish". Right now I am working on an Album which I plan to release in 2022. Also I plan to tour a bit next Year and again to play on some Festivals. Hit me up if you'd like to collaborate or book me. DM via Instagram or via seasoulbooking@yahoo.com .(Pictures: Luca Schnell / Avatar: Katharina Jung)