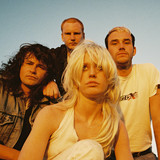 Amyl and The Sniffers

Featuring Amyl and The Sniffers

Renowned for a ball-tearing live show, The Sniffers made their international debut as one of the hottest tipped acts at The Great Escape in 2018. Soon afterwards, they signed deals with both Rough Trade Records and ATO Records, made a massively hyped appearance at SXSW, and finally released their self-titled debut album in 2019, landing them an ARIA (Australian Recording Industry Association) Award for Best Rock Album, capping off a wild year for the lunatic, likeable punks.   Late in 2020, Amyl and The Sniffers went into the studio with producer Dan Luscombe to record their sophomore album, Comfort To Me. Written over a long year of lockdown, the album was influenced by and expanded on a heavier pool of references - old-school rock’n’roll (AC/DC, Rose Tattoo, Motörhead and Wendy O Williams), modern hardcore