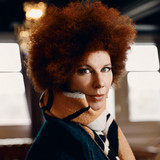 Irya Gmeyner is a Swedish composer, songwriter and music producer. This is her site for film music. She has composed music for a wide array of media including TV series, Film, Theatre-plays, commercials and choir. Several of her songs have been featured in leading American and Swedish TV series. She has toured all over the world with her bands Irya’s Playground Urga. She is also known for her collaboration with the international known contemporary circus company Cirkus Cirkör as singer and composer for several of their international shows.

Irya is also the founder of the collective Gipomusic (Girl Power Music) an artist-run, female-driven collective, record label that she started to connect and strengthen femme creatives in music. Over the years Irya has worked with many well-known Swedish artists and musicians as a producer, singer and composer. https://irya.se