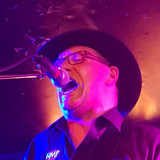 During his time as bass player in bluesband B-sides and bas player and lead singer the rockband RMF Gus started to write music. And after about 15 songs, Gus wrote and recorded "Walking the Light". Micke MiMo Moberg of MiMo Sound Records heard it and called Gus and said: "I wanna produce that!", and suddenly Gus had a single out! He also insisted that Gus awkward Swedish name (Gunnar Möller) wouldn’t look good on a record sleeve, so it had to change. With some help from a friend they came up with Gus Muller which is rather close to home. Gus Muller evolved into a string of studio recordings.

Several singles followed on the first single "Walking the Light" and april 2019 Gus first Album "Never too late" was released. Gus is recording new singles that are released as they are produced. All songs are released by MiMo sounds Records / The Ordchard Enterprise. All lyrics by Gus and all music is written by Gus or for some songs in coopreation with one or more of Öjje Forsberg, Clara and Charlotta Wilson, Stefan Hedenström and Todde Sjöström. On Gus songs you can hear: Gus Muller (lead / backing vocals, guitar, keyboards, bass and drums), Micke MiMo Moberg (guitar, bass and keyboards), Stefan Hedenström (guitar, saxophone, clarinet), Öjje Forsberg (drums and backing vocals),