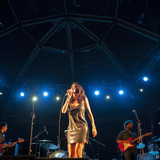 Minerva is composed by 4 musicians who come from different musical landscapes. Abril Gabriele, the voice, displays her delicacy showing her strength, presence and elegance while giving us her smile.

Lluís is a modern guitarist with temper, who doesn’t give up the classics of the six strings. The rythmic part is conformed by Narcís to the drums and Enric to the bass, they bring the tempo Minerva needs combining and melting their rythm to the service of every single song. From the most fragile sensitivity to the most overwhelming strength, Minerva is Music of contrasts. With their album, with roots that drink from Jazz music, soul, rock and pop, Minerva takes us through paths full of personal traces. Capable of moving the audience with songs with great sensitivity they also let themselves go with energy to make us shake and get lost into music. Their first published album, M (self-edited, 2016) is a work with eight songs in english that talk about the emotional states of life, from the delicately mundane awakening in “Morning Tea” to the love and heartbreak in “You don’t care”, “Forget About it”or “By my side”, the freedom in oblivion (I’m Free) or the revolt against conventionalities (Kill Bond). With a voice influenced by black music (from Lauryn Hill to Amy Winehouse) and compositions rich in details in sound, they introduce a personal, fresh vision of pop music with black roots.