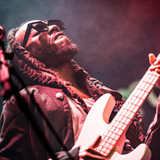 The proficient, World renowned bassist, Rick Leon James rose to eminence on the London music scene in the 2000's, and has a long list of touring credits while simultaneously launching his own career as a band leader. Essentially an improviser, an known for his fiery improvisational lines and inclination toward a strong groove and feel. Rick initially appeared in the 1990's building an audience on the trinidad music scene before moving to the UK to join Daniel Bedingfield's band, he had already established a fruitful career playing with such notability as Bunji Garlin, Benji and later on Vernon Duncan. Hearten by his time with Duncan's live album, he was able to journey to London to become The Bass Player to The Stars. As well as playing on the Pop scene, Rick would host his on Jazz Fusion nights around London where he would be joined by his friends Amy Winehouse, Michael kiwanuka, John Altman, Shabaka hutchings, Femi Temowo to name a few. He also expanded his reach, moving into producing and composing for Yolanda Brown's Love Politics War album. Improviser, arranger, songwriter, film music composer, bassist, multi-instrumentalist Rick James is now one of the most in demand musician known for his versatile abilities. Currently playing with Kamaal Williams, Yolanda Brown and his own Band which ft. David Mrakpro from Blue Lab Beats. Having more time on his hands to focus on his solo career, Rick has released