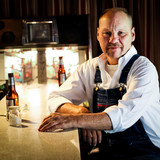 Nashville music industry insiders and country music radio air personalities, have called Kerry Kurt Phillips “One of America’s favorite songwriters”. A 2018 nominee to the Nashville Songwriters Hall of Fame, Kerry Kurt’s songs have been featured in Motion Pictures, TV series, Super Bowl commercials, in the opening ceremony of the Olympic Games, and on Hallmark greeting cards.

Pepsi, Ford, General Motors, Applebee's, the NFL and the PGA have all licensed KK's songs. Kerry Kurt has achieved six #1 singles, has been awarded 75 gold & 36 platinum albums, accounting for certified sales of over 45 million records. His biggest songs include the George Jones’ Smash, “I Don’t Need Your Rockin’ Chair” and several Joe Diffie hits such as, “Is It Cold In Here,” “Prop Me Up Beside the Jukebox,” “In My Own Backyard” and “Pickup Man”.