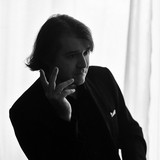 Maxence Cyrin has had a unique career, steering between electronic and classical music, piano and synthesizers. Initially trained in classical music, he later turned towards the darker atmospheres of new wave, before being one of the pioneering gurus of the French electro scene. Around 1995 he decided it was time to move on from techno and reconnect with his classical roots, ultimately producing, over the course of the last 15 years, three albums of original compositions (The Fantasist, Nocturnes and Aurora) as well as compositions and arrangements with pop inspirations, not to mention three albums of piano covers, Modern Rhapsodies and Novö Piano 1 and 2. His famous reimagining of the Pixies’ Where Is My Mind?, at once melancholic and hypnotic, went on to earn him an international reputation, thanks to American TV series such as Mr. Robot and Leftovers, which led in their wake to over 80 million listens on streaming platforms. Aurora, a new album dedicated to Cyrin’s own compositions, brings together a series of 16 pieces performed on the piano (two grand pianos, a Steinway and a Fazioli), which are joined by a string trio as well as various more understated devices, sounds and electronic effects. Four of the pieces, however, are performed using an upright piano, whose tones, created using the mute pedal, take on a deliberately intimate dimension, using cinematic, mysterious colours.