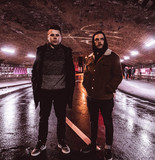 But in darkness we are beautiful. Beautifully lost, somewhere between post-rock and indie-folk: that’s where you can find Foliot. Anyone who’s been at a gig from Foliot knows this weird mixture of emotions that overcomes you afterwards. A culmination of melancholy and euphoria: some sort of sad happiness. In their lyrics, Foliot oftentimes talk about more mature themes, such as death, feeling homeless or being lethargic. Their music mirrors this: lost, somewhere between a warm melancholy and desperation. Inspired by Radiohead’s In Rainbows, Ben Howard’s I Forget Where We Were and The Intersphere’s Relations in the Unseen you’ll hear playful melodies over distorted guitars or a hypnotic loop, drowned in reverb, to leave enough space for the lyrics, while always looming in the dark.  In darkness we are beautiful: We are Foliot.