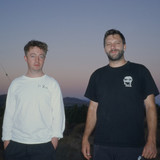 Mount Kimbie are the English electronic music duo of Dominic Maker and Kai Campos signed to Warp Records. Formed in 2008 they released their lauded debut album ‘Crooks & Lovers’ in 2010. The album would go on to be hailed as one of the ‘Best Of 2010’ by over 30 publications. Their influences range from shoe gaze, minimalist, indie, electronica, techno, hip-hop, field recordings and more to pioneer a new wave of British electronic music. After the critically acclaimed dancefloor driven sophomore album ‘Cold Spring Fault Less Youth’, came Mount Kimbie’s most celebrated album to date, ‘Love What Survives’. Featuring long-term friends and collaborators James Blake, Mica Levi, and King Krule, ‘Love What Survives’ found the band exploring rhythm driven textures inspired by kraut rock and post-punk whilst retaining Mount Kimbie’s undeniable electronic fingerprint evident throughout their 3 albums so far. Since then Dominic and Kai have both continued to be highly active. In 2018 Kai curated a techno-driven DJ Kicks mix and has been DJing consistently ever since, including a b2b tour with Actress and headline sets at Printworks and Fabric. Meanwhile, Dom has been based in Los Angeles working in production. Following extensive work on James Blake’s Grammy-nominated 2019 record ‘Assume Form’, Dominic has continued to develop a reputation as a leading voice in production collaborating with the likes of Rosalia, Jay-Z, Slowthai and more.