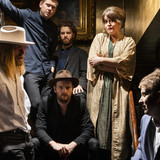 When you boil it down, Hjaltalín is essentially a group of talented friends. They were high-school students when they started playing together; today they are professional composers, producers, songwriters, performers, players (and a pilot!) who have made the band their labour of love for nearly fifteen years. They drew attention very early on with their catchy multi-part chamber pop compositions and became a huge crossover success locally with the 2007 release of their debut album Sleepdrunk Seasons. Still, Hjaltalín’s second album Terminal (2009) proved a much bigger hit, winning ‘album of the year’ at the Icelandic Music Awards, selling over 10,000 copies domestically, and its five singles spending a combined 44 weeks on the National Radio’s Top 20. Over the next couple of years, while the band struggled to deal with the newly diagnosed bipolar disorder of frontman Högni Egilsson, the group recorded Enter 4 (2012) – a tense exploration on art, madness and friendship. It is a sparer and darker album and marks the height of Hjaltalín's critical acclaim. So far.